Today's Post is brought to you by the Tomato...

Time to ketchup on a few things that I've been given or made based on the tomato...
My sugar bowl: 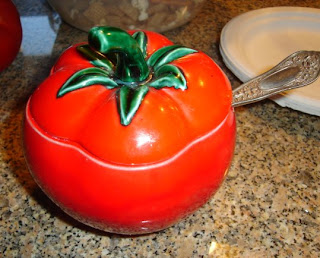 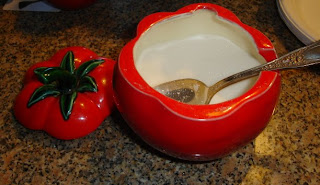 Given to us by Auntie Mae last year and now she's given us a funky little tablecloth to match... 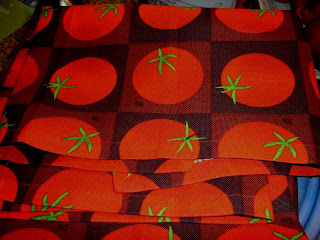 But even more importantly, today I made Fried Green Tomatoes. Yummmmm... 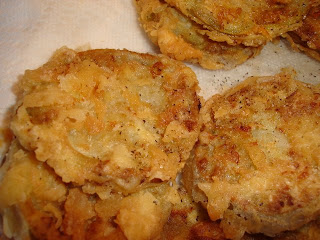 They are super easy, make it just like you would fried chicken, but with green tomatoes: 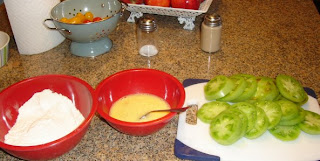 Flour, eggs, green tomatoes and salt and pepper to taste - so simple, yet so good. They are hot and salty and crispy on the outside and tart on the inside. The perfect fall treat.
at 12:05 AM 2 comments: 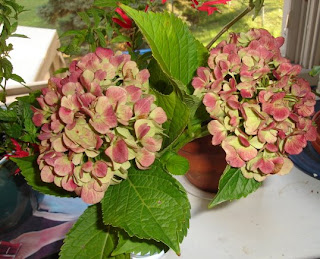 Just a little picture of some beautiful Hydrangeas freshly picked from my garden the other day. I love the pretty lilac shade they turned with just a hint of green to them.

I sold another item in my Etsy store last night. I was tickled pink to find that the stylish Vanessa of A Fanciful Twist bought my little Literary house! I'm packing it up right now. I'll miss it on my bookshelf, but it'll be going to a good home, that's for sure.
I added a new item to my shop just now, too. Just in time for fall - a beautiful set of prim boxes for Thanksgiving. I just love the rich color and style of these and I hope someone else will like them, too. 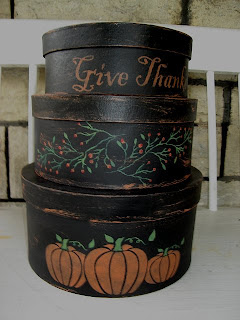 There are more pictures of them at my Etsy store, of course. And here is a picture of the door knocker I bought my mother for Mother's Day a few years ago - it's on our front door and it is so cute: 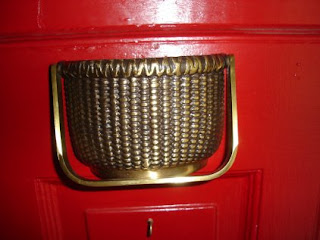 It's a Nantucket basket and the best part is that you can actually put things in it, like a flower or a note. It's very handy.

This past weekend has been very tiring as there was a big move and lots of relatives and cooking and cleaning involved. I'm too tired to do much today, but eat some of the leftover spanikopita we made and do a little crafty work to recuperate.

Hope everyone had a good weekend!

It's definitely feeling a bit cool around here and I'm feeling the need to break out the Fall decorations already. I've seen on other blogs that I'm not alone and that makes me smile. I love it that other people love Halloween just as much as I do. Too bad no one that lives around me seems to feel that way. So last night I dug out my decorations and I'll be spending the day poking around them. I don't want to go overboard just yet, but a few decorations never hurt anyone, right? 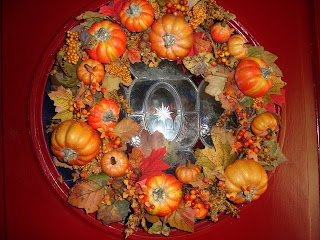 So first I'm starting on the door - just an innocent pumpkin wreath. Believe it or not - my mom made this from deconstructing a store bought wreath that had even MORE pumpkins on it - lots more, but litte else. She took the best pumpkins and added little bittersweet blossoms and leaves and some other type of fall berries and made this beautiful wreath from it. I love it so much - every year it graces our front door through Thanksgiving. I almost hate to take it down for the Christmas wreath.

And then, last night, I decided it was time for some pumpkin muffins. Yum! 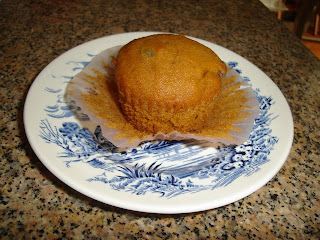 The smell drives the whole house crazy as they bake. These are Pumpkin Chocolate Chip muffins. Now, if that sounds weird, I totally understand. A friend of mine gave me one a few years ago and I thought it sounded gross until I took a bite. Whoa! Delicious. I put a little less chocolate in them and added nuts and they are now even better.
Here's my recipe:
3 cups flour
2 t baking soda
2 t baking powder
2 t cinnamon or pumpkin pie spice
1/2 t salt
4 eggs slightly beaten
2 cups sugar
1 can pumpkin
1 cup veg. oil
2 cups chocolate chips (or less according to taste)
1 cup walnuts
Mix the dry ingredients together in medium bowl, set aside. Mix the eggs and sugar together, then add pumpkin, then oil - mix well. Then add the dry ingredients until well mixed. Add chocolate and nuts. Use paper liners for the muffins and fill about half way or 2/3 way in cups and bake. Makes about 36 muffins.
These taste even better the next day as the spices seem to get stronger. Mmm...
at 12:10 PM 1 comment:

The Extreme Makeover Home Edition show is in my town just now. They've roped off the whole neighborhood where they are currently building the new house while the family is on vacation in Disney World. It's part exciting and part irritating for all the fuss and hassle it creates, but when it is all over I'll have to drive over and take a look. You can go and watch them build if you are willing to stand (no sitting allowed).
at 2:28 PM No comments:

Email ThisBlogThis!Share to TwitterShare to FacebookShare to Pinterest
Labels: house

live the Borrowers. Did anyone else read The Borrowers when they were a kid? I loved the idea of little people beneath the floorboards. I used to 'borrow' things to make my own little Borrowers den and imagine a family using it when I wasn't looking.

I just bought the 50th Anniversary Edition from Amazon and I'm so glad to finally have a copy of it. It's cuter than the normal children's version at the bookstore - if they even have this classic, which most don't. I think my favorite bit is when the are describing the different Borrowers that used to live in the big house before it got so abandoned and they had to scatter. The Overmantles, Harpsichords, Bell-Pulls and Stove-Pipes with their last names corresponding with where they lived. Arrietty and her parents aren't all that interesting, really, but the idea behind the story still fascinates me and as a child I read lots of stories that were similar in theme - like the Ralph S. Mouse stories by Beverly Cleary or the Beatrix Potter story of Two Bad Mice, etc. I also vaguely remember watching the cartoon The Littles' which was a lot like the Borrowers only they had tails for some reason.

So whenever you are missing a pin, a scrap of fabric, or a spool of thread from your sewing basket, just remember - it might be a Borrower.
at 7:21 PM 3 comments:

Email ThisBlogThis!Share to TwitterShare to FacebookShare to Pinterest
Labels: books

I sold my first Etsy item over the weekend and I'm so happy. It was the Musical Fairy House. It's been shipped off to its new home and I've added a new house to my shop already. The Literary House. It's made with turn of the century German text taken from a vintage music book. Check it out! 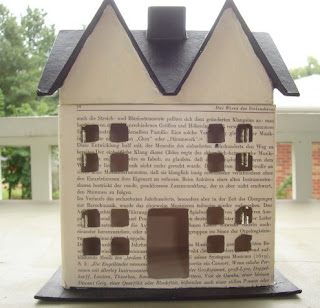 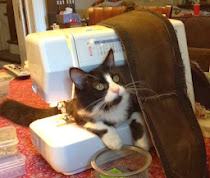 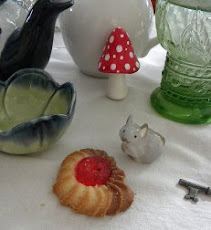 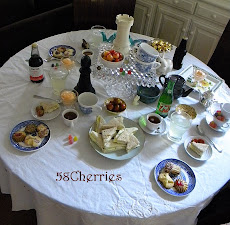 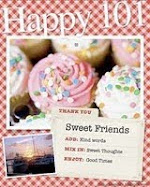